This project was the “test knit” for a pattern I created a few years ago.  I have intended to write this pattern up for a while now, but knew that I needed to recreate the sock from my notes to be able to make it a workable pattern.  Here is the original version of the sock: 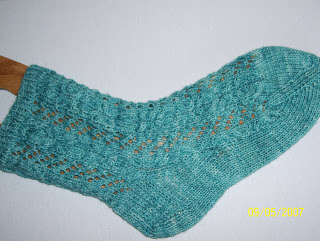 The inspiration for this pattern was the way that the sand looks at the edge of the shore from the movement of the waves.  If you’ve ever walked along the beach by the ocean or even a large lake, you’ll notice that the movement of the waves carves ripples and grooves into the sand at the edges of the beach, also as the waves recede there are little bubbles of foam that form and create sort of a lacy border between the wet and dry sand.  I wanted to create a piece of knitting that captured this effect.
After reviewing my notes from the original pair and examining the socks after many a wearing; I determined that I couldn’t just open my charting softwear and chart / write up the pattern as it was created.  There were a number of design elements that affected the look, fit and wear of the finished sock.  So, I actually needed to revise some of my original design and the best way to do that was to knit another pair.
Firstly, my stitch counts and repeats didn’t work mathematically.  For some reason I used 75 stitches which made a cuff that was very loose and required a drastic reduction during the heel and gusset transition to make the foot fit.  I’ve learned a lot about sock fit and construction since then and made adjustments to correct both of these problems.
Visually, I was able to represent the rippled sand effect with the cable stitch used in the original version, but the lace/eyelet pattern made a lacy border which didn’t quite evoke the foamy bubbles. Also, I wanted a different transition between the eyelet and cable patterns to give it a more fluid feel.
Changing the lace/eyelet pattern was a bigger challenge because I had to find a repeat that worked within the allowable stitch count (not easy) but also one that evoked foamy bubbles.  I had to try several different YO/decrease arrangements before finding one that gave me the look and feel I wanted and that worked with the stitch count.  I’m pleased to show off the result: 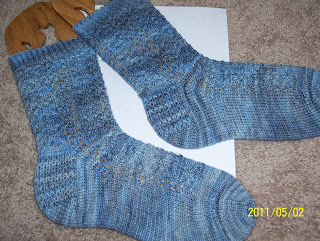 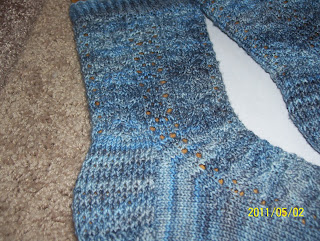 I’m currently working on a larger size to add to the pattern, so the pattern isn't ready yet.  I’d also like to have it properly test-knitted before publishing.  I’ll post it here when it’s available.
This isn’t the only knitting I’ve been doing since my last post.  I’ve sort of lost the will to keep updating the blog and am seriously considering ending it. I've also had difficulty taking decent pictures of any of my projects due to the endless string of grey/overcast/rainy/ spring days that we have been suffering.  For now, future posts will be a series of project updates from Flickr with brief project description.   If/when my blogging mojo returns, I’ll try to get back to more detailed posts.  In the meantime….
Happy Knitting,
Nana
Posted by Denise Bein Kroll at 11:56 AM 2 comments: 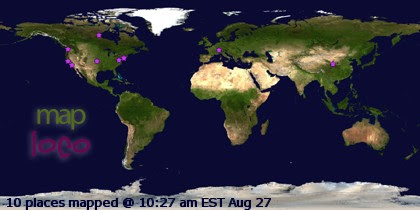 Create your own visitor map!

Nana and The Cats